An atom is defined as one of the basic unit of any chemical element. Any chemical element from small to large weight has large atomic number has some definite atomic radius. The radius is defined as the distance between the centre of a circular substance to its outer perimeter. Hence, the atomic radius is the distance between the centre of nuclei and the electron in the outermost shell. The atomic radius are typically measured in very small SI unit of pico-meters, when 1 pm =  meters. The smallest average atomic radius of hydrogen (H) is about 25 pico-meters and caesium (Cs) has the largest average radius of about 260 pico-meters.

The Basics Of Atomic Radius Trend

There is an interesting trend about the atomic radius of elements in periodic table. The two main trends of atomic radius in the periodic table can be seen when the movement is from left to right i.e. moving within a period and other trend is when moving from top to bottom. The periodic table shown below gives the trend of increase of atomic radii in the direction of arrow. The very first atomic radius trend is that the size of atom decreases as we move from left to right through a period. Now, for each period of elements one new electron is being added to the very same shell. Now, at the time of addition of electron to an atom a proton is also added to the nucleus of the atom. The electrons are basically attracted to the nucleus and thus makes the radius of the atom small. For an example the atom of a carbon C has 6 atomic number of 6 electrons and 6 protons. Whereas, the fluorine atom contain 9 electrons and 9 protons. Hence, from the trend of atomic radius the atom of Carbon C has a larger radius than the radius of an atom of fluorine F as with the three extra protons of fluorine will attract the electrons with higher force than the Carbon atom and thus making the radius of Fluorine smaller than that of Carbon. This is indeed true as the atomic radius of the Carbon atom is about 70 pico-meters and the atomic radius of Fluorine is 50 pico-meters. 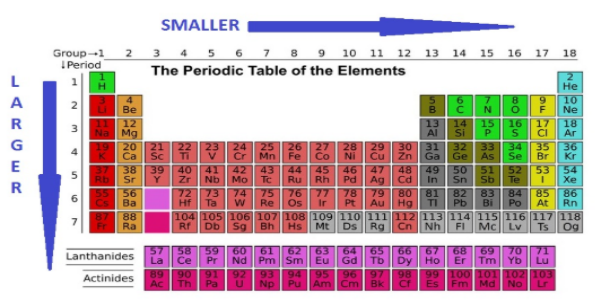 By observation of the above table it can be seen that in some cases, specifically in three cases. The first case is the exception for noble gases which are helium, neon, argon, krypton, xenon and radon. This exception occurs because the bonding of the noble gases are different from the bonding of other atoms. As the atomic radius is the half of the distance between the two atoms and hence the difference in distance between the atoms affects the length of atomic radius. In case of noble gases the outermost orbit is completely filled and hence there exist no covalent force between the atoms of noble gases as electrons are not shared by the atoms. The noble gas atoms are kept together by Van-der Waals force which is weaker than the covalent force. Thus the gapping between the two nuclei is larger for noble gases compared to the gapping between other atoms. Hence, if the empirical radius is calculated for noble gases then it will be overestimated. Hence, any of the noble gases has the empirical radius and thus don’t follow the trend of atomic radius. It can be also be seen that the lanthanide and actinide series does not follows the two trends like they don’t follow many other periodic table trends.

Significance Of The Trend Information

Thus the two atomic radius trends, in brief, are i) reduction of atomic radii as we move downwards in a group ii) The second trend of atomic radii is that the atomic radii decrease by moving left to right through a particular period. The few exceptions that exist in the periodic table for the radius trends are for halogens, lanthanides and actinides are explained for unusual atomic characteristics.

So, that was all about atomic radius trends. Didn’t the concept seem easy? Well, that’s not always the case. Students often find themselves struggling when it comes to other, more complex Chemistry concepts. Especially when students are supposed to make assignments on the same, the task gets a bit too tough. So, what to do in such a situation?

Yes! You read that right. Just when you find yourself caught amid a pile of complex homework tasks, be it Maths or Chemistry Homework help, tophomeworkhelper.com is the one-stop solution to opt for. This amazing service is backed up by professionals having Masters and PhDs in respective subjects and also possesses years of experience in homework writing. So, these unmatched writers not only know what resources to refer but are also aware of all the tips and tricks that would make your assignments outstanding. All you have to do is reach out to tophomeworkhelper.com, share your concern and relax. Rest assured, that you’ll be heading towards a better learning and bright academic career and that too, without missing out on any of those stringent deadlines!

What is Discrete Math?

How to Create an Effective Homework Plan?